As part of our new blog series tracing the supply chain, Anna Barker was lucky enough to interview Harriet Kelsall, award-winning ethical jeweller and one of the most respected bespoke designers in the UK jewellery industry today. Find the first half of this conversation, here. 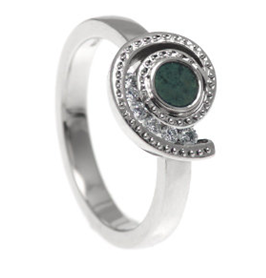 Harriet and I continued our conversation at her converted-barn studios in Hertfordshire, designed by Callum Lumsden, of Mary Portas ‘Queen of Shops’ fame. They are beautiful, set in picturesque English countryside. In this blog series I’ll be working my way up the supply chain, speaking next to refiners, traders, cutters, miners, and pre-financers. I was keen to learn what Harriet sees when she looks up the supply chain, but first, for her to explain what it’s like designing for a university town like Cambridge.

‘Some of my favourites in Cambridge are the ‘geek chic’’, Harriet smiles. One example includes two computer operators who were inspired by Ruby, which happened to be the name of the operating system they use. The ring was surrounded by the binary symbol of a heart. ‘Only in Cambridge,’ Harriet laughs.

‘There was also a mathematician, who wanted a five way Mobius twist, so that he could engrave the names of his five children on each of the facets. It was like a mathematical puzzle.’

The list is endless. A geologist brought in a piece of rock he had personally retrieved from Brazil, on the same trip where his met his fiancée-to-be. His love of geology was behind the ammonite-inspired engagement ring. The HK Bespoke designers are certainly challenged on a regular basis.

Harriet advised the Fairtrade Foundation from a jeweller’s perspective, and was subsequently among the first twenty jewellers in the world to stock licensed Fairtrade gold.
Sourcing from Artisanal and Small Scale Mining (ASM)
I wanted to switch gears and look back up the supply chain, in particular at ASM. So I asked if Harriet was aware of ASM before she moved into the jewellery sector, and the challenges associated with it? ‘I wasn’t aware of the specifics’, she replies. ‘I knew there would be child labour somewhere…I knew there was this thing called ‘dirty gold,’ but I didn’t really know what that meant.’ The phrase ‘ASM’ was not one in Harriet’s vocabulary. 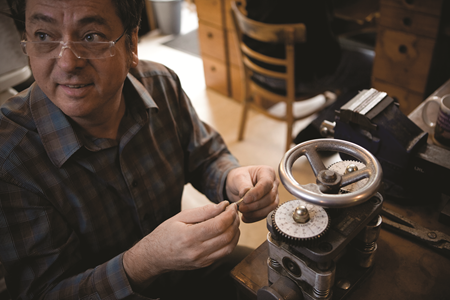 But unlike so many who dismiss or demonize ASM as a hopeless source, Harriet didn’t stop there. It was Oro Verde that first facilitated Harriet sourcing from ASM, both from an environmental and ethical perspective. Their ‘fairly traded’ gold was the cleanest on the market, and it supported ASM. It formed the momentum towards Fairtrade gold, in which Harriet also played a significant role.

The Fairtrade Foundation asked her to advise them on their process from a jeweller’s perspective. Her company was subsequently among the first twenty jewellers in the world to stock licensed Fairtrade gold.

Harriet describes the widespread industry fear of both sourcing from ASM, and the sometimes arduous certifications which guarantee responsible sourcing.

‘There are a lot of mainstream jewellers that should be leading the way and stocking certified jewellery,’ Harriet comments. It is hard, of course, but this extra effort didn’t faze Harriet. She was one of the earliest members of the Responsible Jewellery Council (RJC), joining in 2006.

What does CSR mean to you, I ask? ‘It’s much more than just the supply chain, that’s only really one little lump of what we do.’ It’s about community engagement, environmental practices, and promoting equality.

Last year Harriet created a well-being committee within her team, and tasked them with achieving the goal of improving HK Bespoke environmental and ethical initiatives, whilst contributing to their general well-being.

A sponsored cycle ride has recently been completed; getting the team fit, and raising funds for a small scale mine in Peru which was recently destroyed by fire.

A unique (and brilliant) approach to CSR, typically considered a ‘box ticking’ game for industry actors. ‘I really like this matching of well-being and ethics,’ Harriet smiles. So do I.

‘What we should do is everything that we can do.’ This is Harriet’s CSR mantra; it’s about achieving as much as you possibly can. Being ethical for Harriet is about upholding your responsibility both to the team, and all the communities in which HK Bespoke engage.

For someone who didn’t think you could do a job you love, she has proven herself so wrong. She smiles at every story as she tells me, and her passion is evident in all she says- and all she does. Harriet is motivating to talk to, serving as living proof that you can achieve your goals and fulfil your aims, if you work hard enough. She balances running her own company, regularly giving key-note speeches, winning awards and raising two children.

As far as female role models go, Harriet is up there. She is pioneering ethics in a notoriously difficult industry, and she is making sustainable luxurious, and luxury sustainable. She doesn’t shy away from ASM; she embraces certification and responsible sourcing from those who rely on mining as their livelihood the most.

I leave the interview feeling uplifted. Her CSR philosophy is unique and forward thinking, uniting the personal happiness of her team with the needs of the world. Her bespoke, custom-made jewellery is as ethical as reasonably possible in the world today, and I don’t doubt Harriet won’t continue to fight for a fairer and more responsible jewellery industry. And I, for one, can’t wait to follow that journey.

Harriet founded Harriet Kelsall Bespoke Jewellery (HKBespoke) in 1998 and has since collected over thirty national and international awards. Harriet was Everywoman’s ‘Retail Woman of the Year’ in 2011, and was one of the IoD Director Magazine’s six ‘Women who have most changed the business world’ in 2014. As a champion for ethics, the environment and CSR, Harriet has tirelessly campaigned with others for improvement: in 2011 she helped launch Fairtrade Gold worldwide and her business became the first in the world to be both Fairtrade licensed and certified by the Responsible Jewellery Council.