I recently completed two studies, one for Partnership Africa Canada (PAC) and another for Tetra Tech, funded by BGR and USAID. They looked at the sum total of gold flows from the ICGLR region to Dubai, and some of the mechanisms via which those illegal gold flows actually work in specific cases.

It’s common knowledge that there is a lot of gold that leaves the DRC for Dubai. The UN Group of Experts for the DRC (2015) estimates that this is 10 tonnes a year, but that’s just an estimate. I had wanted to look at how much gold flows illegally through the entire ICGLR region (all of the countries bordering the DRC and Kenya). I took Sudan out; its high gold production rates would distort the figures. I concluded that from all of these countries, omitting Sudan, 20 tonnes of gold was going to Dubai illegally every year. 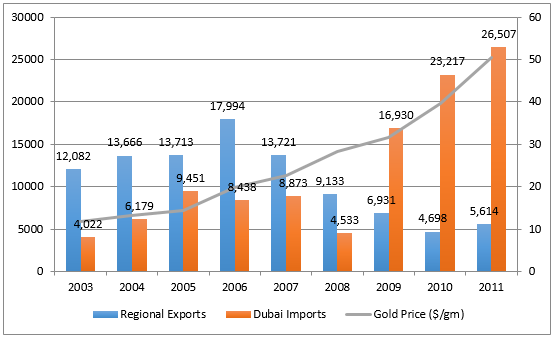 20 tonnes of illegal gold: arriving at this figure

To reach this figure, I looked at Dubai’s commodity trading statistics. I examined the origins of imported gold as declared by Dubai, and if Dubai said it came from any of the countries in the region, I duly recorded that, and added it to the total.

What is the total value of this illegal gold trade?... It’s a one billion USD illicit industry

I then went through the mining bureaus, country-by-country, and got their statistics for legal ASM exports of gold, for those years. I totalled up the legal ASM exports for those years (blue) and the total gold entering Dubai (red, with the rising line representing the price of gold). As the gold price goes up, gold exports increase—but so does smuggling. By 2011, 26.5 tonnes were being exported illegally, whilst just six tonnes was exported through legal channels.

What is the total value of this illegal gold trade? In 2011, the gold price was roughly USD50 a gram. Using rough estimates (20 tonnes at 50 dollars a gram), the figure is one billion USD going to Dubai every year, and returning in illegal financial flows.[1] It’s a one billion USD illicit industry.

One billion dollars of illicit financial flows (IFFs): How it occurs

I examined the mechanisms that allow for this one billion USD illegal gold trade to take place, and the reasons why gold is specifically utilised. Firstly, I found that gold is being used as a banking vehicle. This is DRC-specific and doesn’t apply to other countries in the region. But in the DRC, gold is a banking vehicle because there aren’t functional commercial banking facilities.

I found that gold is being used as a banking vehicle
Instead, you find people looking for someone willing to go to Butembo, a town on the border with Uganda where a lot of goods are imported into DRC. There, you can buy palm or cooking oil, which can be sold at a mine site in return for Congolese Francs, a currency undesirable to transport. You thus convert your Francs to gold, and return to Butembo to buy more oil.
The profit is on the oil; the gold is just a banking vehicle. The gold is bought at a higher price, although not above the LBMA fix, since the money is not made on the gold. This is one reason why there are price distortions in the DRC market.
The international experience
Internationally, how did this work? Again, Butembo is where a lot of the commercial goods come in from Dar es Salem and Mombasa; from motorcycles to electronics, everything comes in containers via this border point. In Butembo, a possible scenario is one in which your main business and livelihood is selling motorcycles, for example, and so you need to buy a container of motorcycles to sell.
You call the trader in Kampala, order your goods, and offer gold in exchange. The trader, in turn, calls someone in Mombasa, or Dubai, who arranges the shipment to Butembo. The payment, in gold, is physically handed over in Kampala, and then onto Dubai where it is sold on the souk and the money is deposited into a bank account.

There are no monetary transfers between Kampala and Butembo, the transaction takes place solely in Dubai. There is then a transfer between the trader’s account and the company that shipped the motorcycles. Traders in Kampala and Butembo explained to me that this was their business model.

For some, this is a profitable business, but for most, it’s a necessity in a region (eastern DRC) where commercial banking does not exist. If you want to order merchandise, you can’t make a Forex transfer. That facility does not exist in eastern DRC, and if something similar does, the cost of it is more than smuggling gold. This is essentially gold being used as an international banking vehicle.

What are some of the solutions we could look at to solve this particular problem? The weakest link is UAE or Dubai customs; the souks and banks already demand customs forms before they buy or allow people to deposit gold. But customs demand no documentation about the origin of gold at point of arrival.

It would thus help considerably if Dubai started to demand proof of legal export when gold is imported into Dubai. Dubai customs should question the origin of imported gold, such as by asking for evidence of taxes paid. This would make the act of arriving with gold in Dubai, and using its relative lack of accountability to claim legality, considerably harder.

But this isn’t just a circuit, a billion dollars a year of illegal money coming from Africa, going up to Dubai and coming back down to Africa. This is the world’s easiest mechanism via which to launder money, if you’re in an organised crime or terrorist group.

For someone who’s collected kidnapping money in, for example, Somalia, the DRC offers an instant launder. Groups are going to start taking advantage of this network unless someone starts taking it seriously and tries to clean it up.

This is why the GIFF Project is so vital. We are not dealing exclusively with criminals, we are dealing with incentivised actors. If we can identify their motivations and reduce their opportunities to work effectively in the illegal gold market, we can tackle this problem.

Shawn Blore is a Research Associate at Partnership Africa Canada (PAC). He previously worked as Research Associate on the Diamond Development Initiative (DDI), investigating Kimberly Process Certification Scheme compliance, and as a Researcher for the Institute for Security Studies, where he studied organised crime in Angola. He has published numerous publications, including the lauded ‘Taming the Resource Curse’.

The GIFF Project is a joint initiative with the Global Initiative against Transnational Organised Crime. It enables practitioners to investigate and map financial flows linked to the ASM gold sector and strengthen programme design and policy formulation.

[1] NB: The American billion, or a thousand million in the British numerical system.