For 15 years, Sebastien Pennes has designed and implemented international development and post-conflict relief projects in Afghanistan, the Middle East, Central and West Africa, and Haiti, with a focus on social and local governance systems including economic livelihoods and conflict mitigation.

Realising that most conflicts originate in the competition for land and natural resources, he led the USAID PRADD project in the Central African Republic in 2010-2013, an example of scaled up, innovative, multi-faceted intervention in artisanal diamond mining, and became passionate for artisanal and small-scale minerals, which he believes can be a positive source of micro-entrepreneurial income and self-governance in fragile environments.

Sebastien is an independent consultant. He lives in the French Basque country and works on risk/conflict analysis and ASM programmes, mostly in Africa. 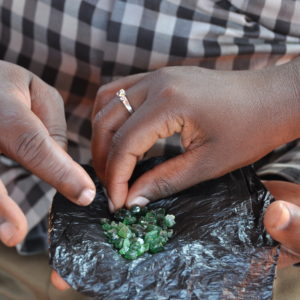 Discover how we facilitated the Kenyan government to develop a national artisanal mining strategy (KAMS) to formalise the sector.