A ‘youth’ in Sierra Leone is defined as someone between the ages of 18 and 35. This extends the United Nations age bracket for ‘youths’ by 10 years. The reason goes back to the Civil War of 1991 to 2002: those 10 years are considered lost, representing a waste of 10 years for young people.

In Sierra Leone’s war days, and especially in Kono, youths were the key drivers of most of the atrocities carried out and their roles with the different factions are well recorded. Over the past months, we have once again seen the spotlight on youths; but this time, they are fighting against the Ebola virus disease. Youths have become the front-runners in the fight to bring this crisis under control.

Sierra Leone is blessed with a large youth population of working age. They represent the majority of the able-bodied members of the Sierra Leonean community and their contribution to contain the crisis cannot be overemphasized. Many youths have been driven into self-redundancy as mining and other employment opportunities have been drastically reduced during the Ebola crisis. Nevertheless, their role in the various pillars fighting Ebola has been phenomenal.

In the case management pillar, youths have been the front-runners of the burial teams, implementing and sustaining the swift, safe, and dignified burial system. Today, all burials in the district and the country at large are undertaken by youths, organized into community burial teams.

Youths are also conducting a significant amount of the surveillance of ‘suspected’ and ‘confirmed’ persons through contact tracing. Contact tracing is an important aspect in the fight against Ebola because it targets the communicability of the virus. No end to the crisis is possible if the chains of transmission through direct contact are not identified and broken. This requires surveillance, which in turn requires access and mobility across great distances, often connected by rural roads. The road conditions of Kono, like most of rural Sierra Leone, are extremely challenging. Nevertheless, the roads are being been braved by strong, young men and women.

The monitoring, and to some extent reduction, of peoples’ movements is required to be successful in the fight against Ebola. This will only be made possible if certain restrictions on inter- and intra- community movement are put into place. 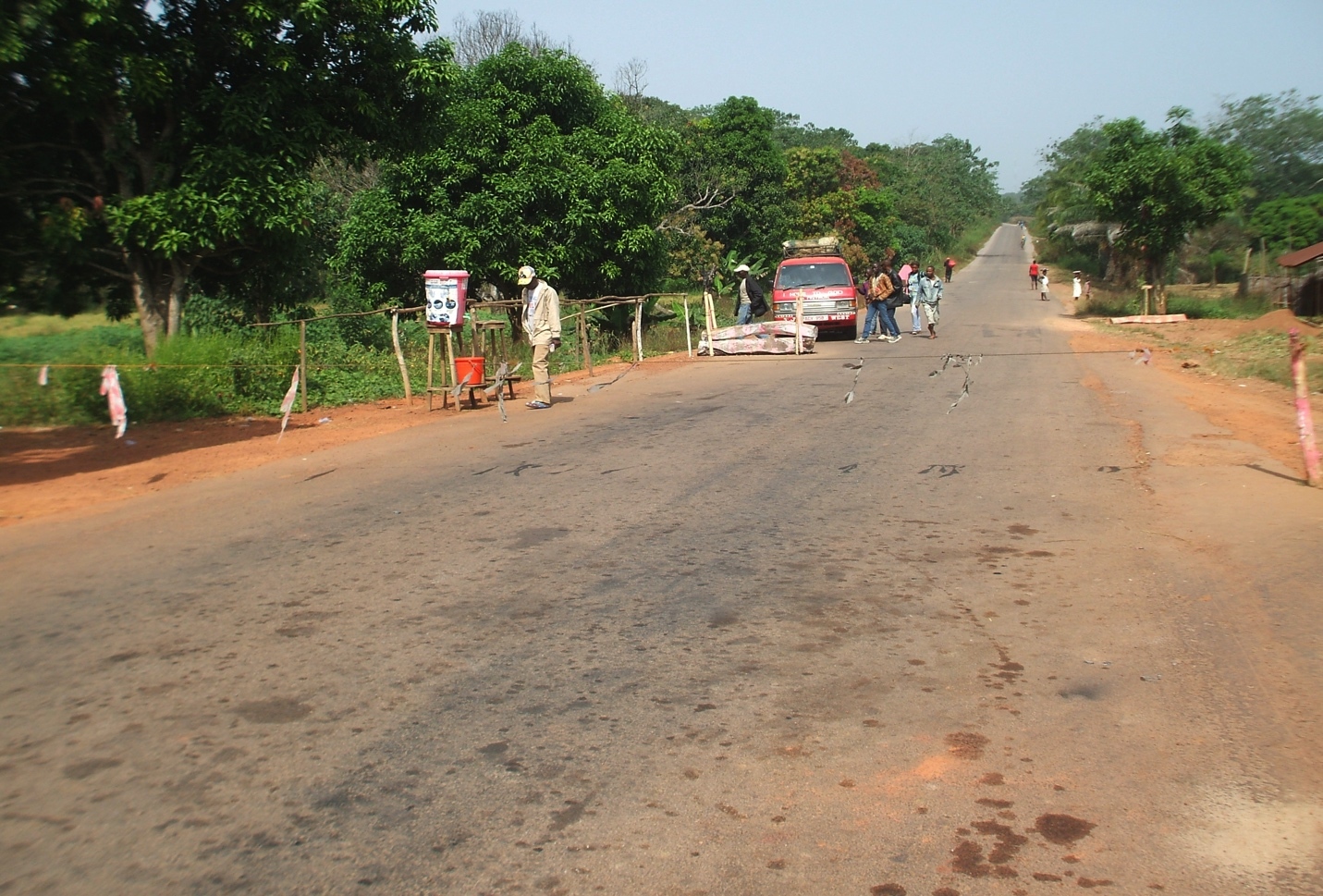 The youth of Tankoro at an Ebola checkpoint

Certain communities have been able to achieve success in the fight through the use of youth checkpoints, put in place all over Kono, which restrict the free movement of people. Today, all internal and external borders of communities in Kono – including chiefdom, sectional, community, and area boundaries – are being manned by youths at checkpoints. Most of these youths have volunteered to support the twenty-four hour checking of all incoming and outgoing people in a bid to protect themselves and their community members.

In the social mobilisation pillar, youths have been instrumental in raising community awareness on the epidemic through dramatization, music, meetings, and workshops. This has improved knowledge of the disease tremendously, since in the early stages of the outbreak even its existence was denied by many.

Despite the huge sacrifice made by the youth population in every facet of the fight against the Ebola virus, most of these youths have barely managed to secure a square meal per day. There is constant news about international financial support and humanitarian donations: parliamentarians, government ministers, and district health management teams appear to be well funded. Recently, there was news of over one million United States dollars allocated to all 149 paramount chiefs in the country. Very little of this seems to be reaching foot soldiers on the ground, and this has caused resentment to grow. Dissatisfaction over the allocation of resources has already resulted in violent demonstrations and sit-in strikes. In Kenema, corpses were displayed in front of the hospital and premises of authorities to protest delayed payments to the burial team.

Meanwhile, most of what used to be seen as normal sites of activities and jobs for youths – football clubs, nightclubs, as well as mines, learning institutions, and training centres – are now closed. There is little available to occupy these youths. The crisis may have provided gainful engagement for some, but if this work does not fulfil their expectations, or accommodate enough youths, the risk of social issues emerging or escalating will be high.

Youths are ready, committed, and working to sacrifice and fight to end the outbreak. If the youth factor is properly addressed and the necessary and needed resources are supplied to them, the crisis could be a thing of the past in a not too distant future. Conversely, if the Youth Factor, which has been so instrumental in containing the current outbreak, is not properly managed, it could reverse the whole process or result in a bigger conflict situation.

For too long, Sierra Leone’s youth have been used for the achievement of agendas only beneficial to politicians. We will have to wait and see if this is another example of the use of such agendas, especially when elections are due to take place around about the end of the crisis.